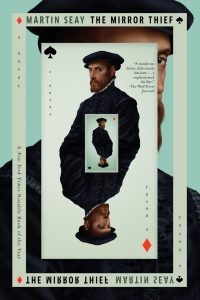 In March of 2003, the days leading up to the invasion of Iraq, a recently-retired U.S. Marine travels to Las Vegas to track down an infamous professional gambler who’s gone missing under suspicious circumstances.

In February of 1958, a Brooklyn-born juvenile delinquent arrives in coastal Los Angeles—a hotbed of the nascent Beat scene—to search for an obscure poet with whom he’s become obsessed.

In May of 1592, a war-hero physician and alchemist navigates the intrigues of Venetian society as he conspires to steal the secrets of making flat glass mirrors on behalf of a shadowy foreign power.

In his debut novel, Martin Seay weaves these strands into a unique literary thriller: an entertaining, puzzling, ultimately moving novel about the ways we are haunted by our own reflections.

THE MIRROR THIEF was released by Melville House on May 10, 2016.

It won a 2016 Book of the Year award from the Chicago Writers Association, was chosen as the best debut of 2016 by the Chicago Review of Books, and was included among Publishers Weekly‘s and NPR’s lists of the year’s best books, as well as the New York Times Book Review‘s list of notable books.  It was also selected as a Winter/Spring 2016 Indies Introduce title by the American Booksellers Association, and was long-listed for the 2016 Center for Fiction First Novel Prize.

Reviews are available at this link.

THE MIRROR THIEF is available through your favorite local bookstore, and online through Melville House, IndieBound, Powell’s, Barnes & Noble, Amazon, and iTunes, among others.

An audio version of THE MIRROR THIEF read by Edoardo Ballerini has also been released by Recorded Books.  In July 2016 it won an Earphones Award from AudioFile Magazine.